COVID-19 Reports on Latin America and the Caribbean: No. 7

One of the unique characteristics of the Caribbean region is the proliferation of non-independent territories. These jurisdictions are individual islands, territories or archipelagos with different levels of dependence to another country outside of the region. Specifically they are the following:

In this short report, I will summarize a few examples on how the local emergency responses to COVID-19 in these non-independent jurisdictions have had to take into consideration and navigate procedures and challenges from both their dominant central jurisdiction and local circumstances. 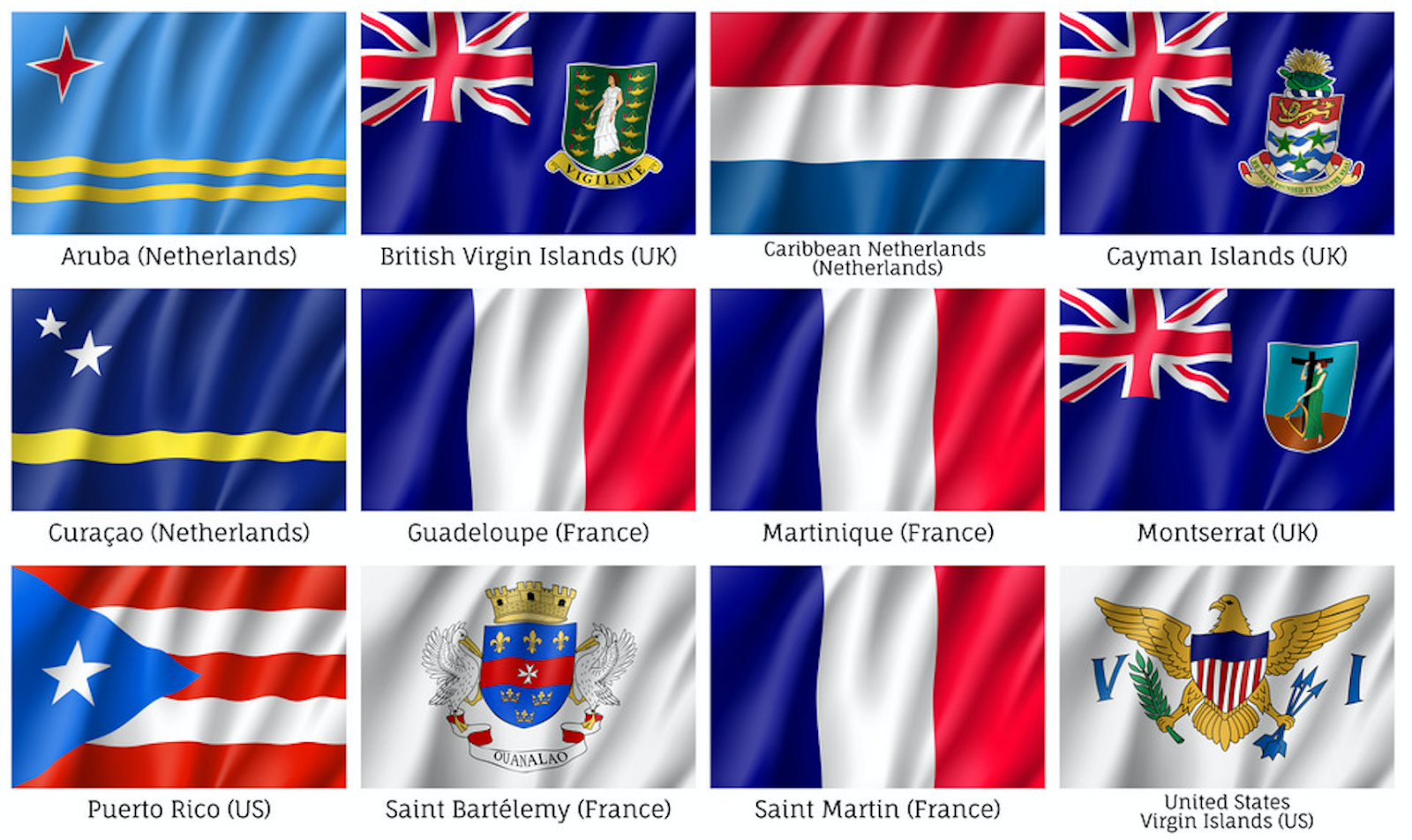 The United States has two unincorporated and organized territories in the Caribbean region: Puerto Rico and the US Virgin Islands. Despite its geographical proximity, both territories have been impacted by COVID-19 in dramatically different ways. Since March, Puerto Rico has had one of the highest rates of confirmed coronavirus cases in the region. On the other hand, the US Virgin Islands has claimed one of the most successful responses to the pandemic among the islands, within the United States as a whole and even the world. With the recent reopening plans, both territories have had to balance the need to reignite their local tourism industries as well as preventing an increase of cases.

Since the early days of declaring a state of emergency on March 12, border closures have been a point of contention in Puerto Rico. The U.S. territory can’t close its borders without approval from the federal government. On April 8, Governor Wanda Vázquez asked the Federal Aviation Agency to stop Puerto Rico-bound flights from six U.S. cities considered to be coronavirus hotspots. While the agency did not grant the request, it did limit Puerto Rico-bound commercial flights to the San Juan international airport. A set of travel guidelines has been put in place for inbound travelers from both domestic and international flights. Those who do not comply may be administered a rapid test at the airport, and if they test positive, they may be ordered to undergo a two-week quarantine and a test to get out of isolation. Ana Delgado, our project member in charge of monitoring Puerto Rico, Cuba and Dominican Republic, will be reporting later on regarding new developments and more in-depth information.

The limitations when it comes to border closures is also an issue for the US Virgin Islands (USVI). For example, Governor Albert Bryan, Jr. issued several executive orders prohibiting hotels, villas and other accommodations from accepting leisure guests between March 25 and June 1. Much like Puerto Rico, USVI was not able to close its airports. Local officials do not have the authority to do so because the federal government regulates aviation. The U.S. Virgin Islands formally welcomed tourists back to its shores on June 1 with caveats. Travelers from coronavirus hot spots needed to submit COVID-19 test information through an online portal to receive a negative result “certification code.” Those who didn’t were required to quarantine for 14 days or until they had documentation of a negative test result. The Virgin Islands’ case counts soon began ticking up with the total number of cases more than doubling between June 1 and July 15. Governor Bryan responded by issuing other executive orders to regain control of the outbreak, including prohibiting beach visits after 4 p.m. and not allowing patrons to stand or eat at bars in restaurants.

Overseas France (France d’Outre-Mer in French) in the Caribbean region is composed of two categories: departments/regions (Martinique, Guadeloupe and French Guiana) and collectivities (Saint Barthelemy and Saint Martin). The overseas departments and regions are considered both integral parts of France and the European Union (EU). On the other hand, overseas collectivities have semi-autonomous status.

Our project member, Anne Pajard has reported on the situation in both Martinique and Guadeloupe. For the purpose of this brief report, I would like to mention the edict no. 2020-377 dated March 31 authorizing foreign doctors to work in some overseas departments such as Martinique and Guadeloupe. This measure builds on an amendment approved July last year regarding Cuban doctors specifically in Martinique. This time around, Coronavirus made a major difference with regards to allowing foreign doctors, particularly Cuban ones in both Martinique and Guadeloupe. A series of measures directly impacting Overseas French Departments were enacted at the end of March. Besides foreign doctors, these new measures also included more medical equipment and new regulations for local hospitals. Under the guise of “Cuban medical diplomacy”, the arrival of these Cuban delegations needs to be approved by the local medical authorities and their deployment has not been unscathed of debate and controversy.

When it comes to the number of COVID-19 cases per inhabitant, French Guiana has the fourth highest density of confirmed cases in the world and virtually tied with Aruba for the first position in the entire continent of the Americas. This precarious situation has prompted local authorities to keep all international borders closed, especially with its two closest neighbors: Brazil and Suriname. To determine whether or how long the borders will be closed, French Guiana must rely on the French embassies in Suriname and Brazil. COVID-19 has brought to the fore border issues which were already creating significant problems such as rampant illegal crossings, heavy traffic of drugs and exotic wildlife, illegal gold mining among others. Furthermore indigenous communities which rely on porous borders have had to face a tsunami of new strict regulations, border closures and lack of access to health services.

Saint Barthelemy and Saint Martin are both French Overseas Collectivities. This status allows these territories to have a certain degree of autonomy vis-a-vis the central government. Since the organic law no. 2007-223 from February 21, 2007, both territories have been separated from Guadeloupe and since 2012, only Saint Martin chose to remain in the European Union (EU) as an Outermost Region. Since 2012, Saint Barthelemy has become an Overseas Country of Territory (OCT). This new status allows people on the island to be EU nationals without being part of EU Territory. This status has given Saint Barthelemy a wider degree of freedom to reopen its borders a lot earlier than other islands to the international tourism the island so massively depends on. Saint Martin’s response to the pandemic has in large proportion depended on its close relationship to the Dutch side of the island, Sint Maarten. Despite both sides being official parts of the EU, their different territorial agreements with their respective central governments and the different local responses to the crisis have exacerbated previous problems between the two sides of the island.

Compared to other territories in the region, the Dutch Caribbean islands seem to count with a larger degree of legal and legislative autonomy. They are all OCTs outside of the EU territory. Aruba, Curaçao and Sint Maarten are all, together with the Netherlands, constituent countries (landen in Dutch) of the Kingdom of the Netherlands. Saint Eustatius, Saba and Bonaire are special municipalities (bijzondere gemeenten in Dutch) within the constituent country of the Netherlands and managed in part by the National Office for the Caribbean Netherlands. These arrangements have proven to be tenuous given the double threat of Coronavirus and complete collapse of local tourist industries. As I mentioned before, the pandemic has badly hit Aruba in terms of cases per capita with Sint Maarten and Curaçao not so far behind. Despite the lower levels of infections in the special municipalities, the abrupt collapse of tourism has still impacted their economies tremendously.

The central Dutch government has promised to help the islands, not without a few strings attached. In exchange for financial help, the Dutch authorities would like to implement a series of reforms in all of the Caribbean and appoint Dutch managers to oversee such reforms. Despite the welcoming news of much-needed reforms in several industries and public sectors, local authorities in the islands have rebelled to the imposition of Dutch managers to administer such aid.

In the case of the three special municipalities, the central Dutch government has been able to help them directly as they rely more heavily on them. A series of measures have been put in place to help both recently unemployed people as well as business.

As our colleague Yasmin Morais mentioned in her report, all British Overseas Territories are part of CARICOM. Montserrat is a full member while Anguilla, British Virgin Islands, Cayman Islands and Turks & Caicos are Associate Members. This is an important point because membership to CARICOM allows these territories to participate in regional efforts to combat and navigate the health crisis. At the time of this report, both Montserrat and Anguilla have zero active cases. Cases have been on the rise lately in the British Virgin Islands and the Cayman Islands. When considering cases per capita, the situation in Turks & Caicos is one of the worst crises in the region.

Unsurprisingly, the differences in cases also shed some light on the disparate responses in the British territories in the Caribbean. Due to its close cooperation with CARICOM, Montserrat benefited from the very beginning of the expertise and resources from the Caribbean Public Health Agency (CARPHA). Unlike Montserrat, Anguilla has initiated steps to reopen to international tourists and visitors since September 14. Entry to the island is heavily restricted and approval can be withdrawn depending on the person’s country of origin. Anguilla has also joined an increasing list of places where “digital nomads” are encouraged to work for periods of time in exchange for a yearly price. All of these agreements and policies demonstrate the power British territories have to some extent when dealing with their own international borders.

In the British Overseas Territories where COVID-19 have surged a second time, the health crisis has created less clear boundaries as to who is in charge of what. For example, the UK-appointed British Virgin Islands Governor Augustus Jaspert implemented a two-week lockdown early September and invited the British Navy to secure its borders. Jaspert overrode the islands’ Premier Andrew Fahie to approve such measures. A somewhat similar situation happened in the Cayman Islands, when current Governor Martyn Roper stepped in and on September 4, he approved the Civil Partnership Law allowing same-sex marriage in the islands after the same legislation had been defeated in the local legislative body. Despite these actions not being directly related to the COVID-19 crisis, a few politicians have criticized Governor Roper’s moves at a time when the islands are facing a health crisis and the collapse of its tourism industry.

From all the British Overseas territories, Turks & Caicos Islands (TCI) are the most badly affected ones after a few cases of community spread. Despite being one of the first islands to reopen to tourism on July 22, TCI has had to implement curfews in various islands and inter-island traveling is severely restricted. Governor Nigel Dakin did consider a second lockdown due to the rapid increase of cases. However, the local Cabinet which included Premier Sharlene Cartwright Robinson decided only to continue with the strict measures and monitor the situation more closely in the reported clusters instead. The almost exclusive reliance on tourism has left TCI unprepared to battle the uncertainty and dangers of reopening while the pandemic is still ravaging other parts of the world.

One thought on “Emergency and Limitations in the U.S., French, Dutch and British Caribbean”